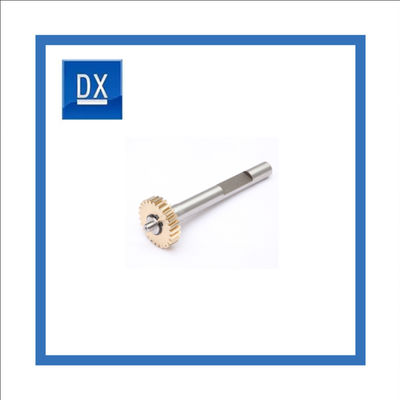 The worm gear structure is commonly used to transmit the motion and power between two interleaved shafts. The worm wheel and the worm are equivalent to the gear and the rack in the middle plane, and the worm and the screw are similar in shape.

Institutional characteristics
1. A large transmission ratio can be obtained, which is more compact than the cross-shaft helical gear mechanism.

2. The meshing tooth surfaces of the two wheels are in line contact, and its load-bearing capacity is much higher than that of the cross-axis helical gear mechanism.

3. The worm drive is equivalent to a spiral drive, which is a multi-tooth meshing drive, so the transmission is stable and the noise is small.

5. The transmission efficiency is low and the wear is serious. When the worm gear is engaged in transmission, the relative sliding speed between the meshing gear teeth is large, so the friction loss is large and the efficiency is low. On the other hand, the relative sliding speed means that tooth surface wear is serious and heat is serious. In order to dissipate heat and reduce wear, more expensive materials with better anti-friction and anti-wear properties and good lubricating devices are often used, so the cost is higher.

6. The axial force of the worm is relatively large.

1.Q:How do I pay for my purchase order?

2.Q:Can I have my own order customized products?

3.Q:Do you have quality control?